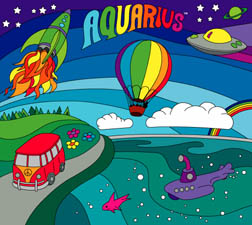 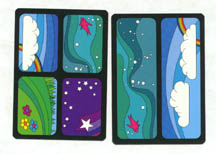 Looney Labs makes a card game called Aquarius. I really like the artwork on the cards, but I find the game a little too random and chaotic for my tastes. So I started trying to come up with alternate games that could be played with an Aquarius deck.

There are several other games using the Aquarius deck listed on the Aquarius instructions page, but I haven't tried them. Pantopia looks the most promising, but I think it's still an unfinished design awaiting further playtesting.

If you have or know of any other game that use Aquarius cards, send me mail and I'll add a link to it. Actually you'd probably be better off sending a link to Looney Labs so it gets onto their Aquarius page, but if it's particularly cool I may single it out on this page too.

I have invented a few other games that don't use Aquarius cards.